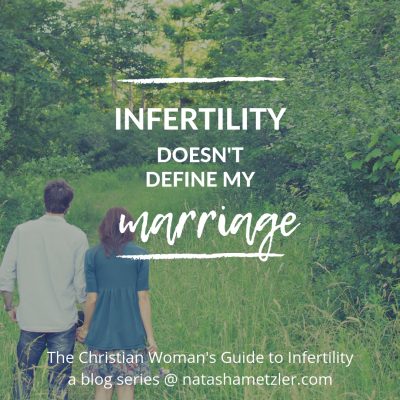 << This post is part 3 of a blog series titled The Christian Woman’s Guide to Infertility: Finding Hope and Healing even without a Baby. >>

I was sitting on the stairway at my in-law’s house, sobbing silently into a balled up handful of toilet paper. I could hear everyone, right around the corner. They were talking and laughing and playing games.

My husband had no idea what was wrong. All he knew was that I had disappeared. He wanted me to be beside him, meeting his friends from out of town, celebrating the holiday with his family. Instead, I was grumpy and silent and then disappeared from the group until it was time to leave. When I showed back up my eyes were red and I looked sullen and angry.

I was actually breaking.

His version left him breaking.

Sticking two broken people together can be catastrophic.

Or, by God’s grace, they can be remade into one miraculous, beautiful masterpiece.

When we arrived home after that holiday get-together, we had the biggest fight of our marriage to-date. Broken pieces, sharp and painful, slashing at each other, hurting more from what we inflicted on the other than from what was inflicted on us.

I remember feeling like a band had tightened around my chest and squeezed so tight, I couldn’t breathe. I wanted to say, I thought I was pregnant. I really, truly thought I was pregnant. But I wasn’t. And now I feel like a stupid fool. Of course I’m not pregnant. Of course I can’t give you children. Of course you should have married someone else—anybody else. Then you’d have the family you deserve and I wouldn’t feel so guilty for bringing this emptiness to you.

But I didn’t know how to say any of those things because when they came close to my lips, I could tell they were wrong, off somehow. So instead I cried. Deep wrenching sobs.

And my husband? He stood across the room and said, with defeat and agony lacing his voice, “I’m sorry I’ve disappointed you so badly.”

The beautiful marriage of my dreams was reduced to a crying wife and defeated husband and I hated it so intensely, I shook with anger and frustration.

Dear God, what can I do to fix this? I prayed, determined to do anything I had to.

It wasn’t until years later that I realized the answer that came to me was from a Bible verse. All I knew where the words that hounded me until bedtime were true and they required action on my part.

You need complete humbleness. Complete gentleness. Instead of withdrawing into yourself, you need to patiently and lovingly give of yourself so there can be unity and peace. [from Ephesians 4:2-3]

It was actually my lack of humbleness that kept my mouth sealed tight for so long. I knew my thought process was wrong, and I didn’t want to acknowledge how deeply the lies were embedded in my mind. I wanted to be strong enough to deal with my own ridiculous tendencies on my own. So I let them fester in darkness, instead of bringing them to light.

But instead, that night, when we were lying in bed and I couldn’t see his face or read the disappointment and fear that often slipped across it because his new wife was turning out to be crazier and less perfect than he expected—I started talking.

I spilled out all my hopes and crushed dreams and horrible fears and all that I felt God had once called me to and why I felt like I was failing at every turn. I told him about how I knew it was foolish to hope for a pregnancy every month, but I did anyway, and then I felt so stupid and so ridiculous. I told him that when I looked in the mirror, I felt like the poorest version of myself and I couldn’t imagine that he liked me anymore than I liked me—which wasn’t much. I curled right up into a ball and whispered that I knew he could have had a different wife who could have given him children and been less crazy than me, and just the thought of that left me cringing in horror.

I cried more and I prayed right out loud and then my husband’s hand was slipping into mine and he said the words that changed the course of our marriage. “We’re going to fight this together. No matter how long it takes. I’m right here and I’m not going anywhere and when you need me just talk and we’ll turn to Christ and we’ll make it.”

And what our marriage was going to be was determined right then.

It’s born the storms of depression, lost babies, living overseas, older child adoption, long-term infertility, fires, loss. We’ve weathered tempers, hurt, fear, heartache, and death. We’ve fought and cried and there was even the one time I left the house and walked for miles before finally going home, only to find out he had done the same thing the other direction and neither of realized the other had gone anywhere. We met at the front door and burst into laughter at our own foolishness.

We’ve struggled through it all while clinging tight to each other and to the God-Who-Redeems-Brokenness.

Our marriage hasn’t survived because we did things perfectly. Or because we got lucky. It has survived because when things got rough, when infertility (and all the other trials of life) brought it’s boatload of insecurities and fears and hopelessness, we chose to hang on to each other and put our feet down on the Solid Rock. My husband chose to love me despite my instability and I chose to love him even though I didn’t feel a thing, I was so numb.

And from these two broken people, came something that brings such deep joy—there aren’t words for the beauty of it.

My mother used to repeat a verse to me. She’d catch me being reckless in relationships and she’d say quietly, “A wise woman builds her house, dear, but a foolish woman tears it down with her own hands.”

Fascinatingly enough, the Hebrew verb used in Proverbs 14:1 banah, or to build, can also mean fortify, repair, rebuild, or restore.

In other words, it’s not just about what you first build. You don’t have to get it perfect the first time around because even if you’re a mess and weak, rundown and broken, wisdom says things can be repaired, rebuilt, restored, and fortified.

Or, of course, you can do the opposite. You can be the unwise woman who tears her own house down. You can haras, the verse says. You can tear down, break, and utterly overthrow. You can foolishly tear your own self to pieces by attacking everything around you and in you.

Wisdom is found by asking God, and I wanted to be wise. I wanted to restore my marriage and my heart.

His answer to my prayers– the instructions He gave me to be humble and gentle, to give of myself, instead of withdrawing– this started a process of rebuilding that changed everything.

Humbleness was the first step—allowing myself to be vulnerable and honest about what my heart was believing. Bringing everything to light so the lies of the enemy couldn’t hold me in bondage any longer.

The next step? Gentleness.

I was so blind to my husband and his heartache. He wasn’t lamenting over our lack of children, or pushing to doctor more, or crying himself to sleep. And because he didn’t look or act like me, I was missing out on a vital truth: he was grieving just as deeply, it just looked different.

It was so easy to be harsh with anyone I felt didn’t understand. It was easy to judge and be frustrated and irritated. I cried over another negative pregnancy test and my husband seemed unfazed and I decided that meant he didn’t care as much. I decided that meant I was alone. And my harshness scraped us both raw.

The instruction to live gentleness began to push at my heart. The word “gentleness” is sometimes translated meekness, and sometimes gentle-force, and it is always a call to lower my self-focus and look with quiet intensity at others—seeking for ways to understand and help.

Infertility affects men and women at different cores, but in the end we’re all faced with the same agony. Once I realized this truth some of the walls dropped in our relationship. When I looked at him, I knew I was seeing someone who understood my agony better than anyone else in the world.

He was there for every step of loss that marked our lives. He was the only person who had been there for every moment. I had friends who cared and family who was close—but my husband got it all. And the closer I listened, the louder his words came. The words he’d been quietly speaking all along. The words that showed his own sorrow. The words I had missed in my self-focus.

Just as God promised, when I gave of myself—humbly sharing my struggles and heart, gently pushing for knowledge of where my husband was at and how he was growing and struggling—I found unity and peace in my marriage.

It’s not simple though and it’s not a three step process. It’s a daily, moment by moment, day after day, decision.

It’s today, more than a decade after that first step toward wholeness in my marriage, having to make the same choice again.

And it’s not easy! Honestly, sometimes I want to just wallow in self-pity instead of get up and work. I want my husband to do my job, because I’m tired of being humble and gentle. I want my hurts and my struggles to be the most important thing, instead of allowing Christ to be the center and the focus. But if I want my marriage to make it, I have to do the work.

And what my marriage will be is being determined right now by the choices I make today.

Infertility changes marriage, just like having children can change marriage, but it doesn’t define it.

By surrendering to the Father’s voice and requesting His wisdom, our marriages can be stronger, more beautiful. They can be gloriously rebuilt and restored—strengthened by the journey through infertility instead of destroyed by it.

Are you being gentle and humble with your spouse through this journey? Are you wisely building up your marriage? Or allowing the harshness of infertility and loss to tear down the relationship you once had?

The beautiful, glorious news is that no matter what the true answers are to those questions– the choices we make right now, today, can determine what our tomorrows look like. We can ask God for wisdom and He promises to reveal to us how to start the process of rebuilding and restoring.

And that’s some kind of good news.

“IF YOU’RE HURTING IN ANY WAY, THIS BOOK IS A MUST READ.  IT WILL ENCOURAGE THE DEPTHS OF YOUR HEART IN WAYS YOU CAN’T IMAGINE!” 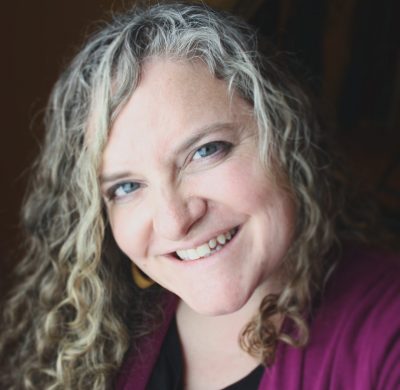 Wondering how He can redeem your pain?