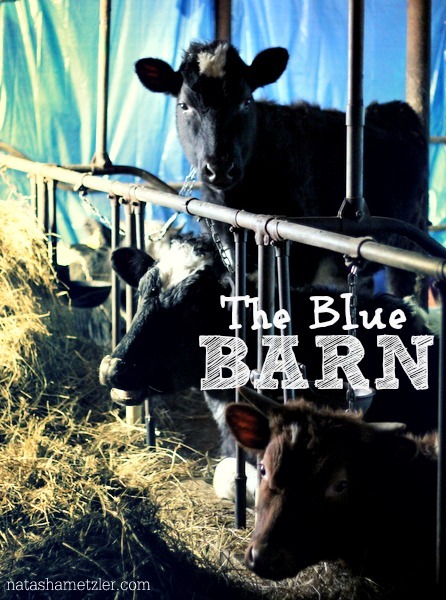 The barn is blue. Half a dozen bright tarps strung from rafters and held firm to the floor with bales of hay. All the animals are in one corner, held in place by blue walls.

The numbers are so few, they are being watered by hand. They do not produce enough body heat to keep the pipes thawed. So morning and night we haul in five gallon buckets of warm water and let them drink their fill.

Donkey will come drink, but he’s still offended that we sold his friends and that I stopped coming to the barn for hours each day. He walks over, slurps down the pale of water, then neatly turns and marches away. Sometimes I sit right down on the bucket, hold out a hand and sing a song about donkeys. Eventually, he’ll turn right around and come back, nuzzling my hand then my arm then my neck. He acts so tough, but he really does like me. 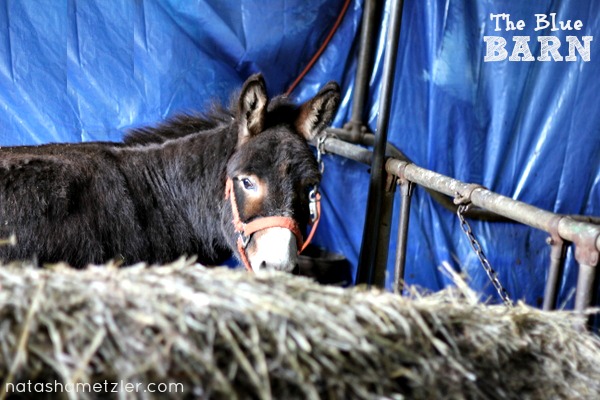 McCully, the pup, is a bundle of energy. The moment you step through the door he is jumping, straight up and down, up and down, straining at his chain. We leave him loose sometimes but his favorite pastime is pulling bolts from the bolt bin. This isn’t the best since cattle aren’t very smart and will eat the bolts and kill themselves. So McCully gets chained up and he shivers in excitement when we arrive. He runs up and down the steps to the hay mow and we send him on laps around the barn, burning off excess energy. Sometimes my husband will invite him along in the truck and I’m pretty sure, by the way he tilts his head, that he’s smiling. 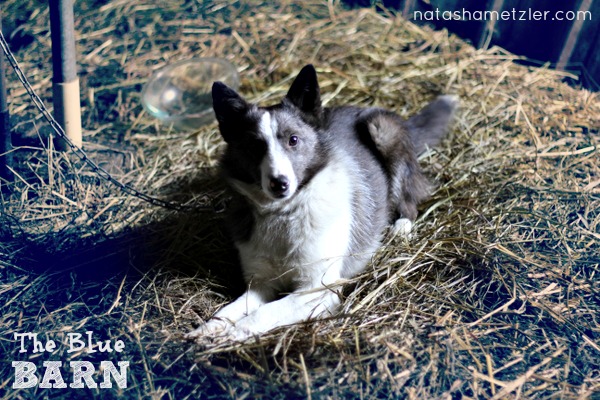 The blue walls can’t contain MamaKat. She slips under the edge by the gutter cleaner shed and then darts over a pile of bales to disappear upstairs. She’s the only female cat left, all black and white, blending in with the cows. Two days ago I went to get hay and she stood and meowed at me, all defiant and hissy. I smiled because I know her secret. Somewhere in the pile of hay there are new kittens.

The three little piggies live in a house made of wood, in a pen filled with straw, without any bricks in sight. When you walk up to them they wiggle their noses and grunt. They grunt a bit extra if there is a bowl full of scraps from the kitchen. They like variety but greatly dislike banana peels.

Moo-Moo, the bred heifer, stands in the end stall. She’s a small heifer and we watch her carefully, knowing she may have a hard time freshening in. So far she is happy and content to eat her hay and chew her cud and take nibbles of my hair when I walk by. If her calf in born without problems, I have plans to milk her for a few months. I miss my raw milk and homemade ricotta cheese.

The littlest heifer is just three months old. She is round as round can be. She smacks her lips and pulls her baler-twine collar when I bring her a handful of calf grain. She needs the vitamins and minerals it contains to grow healthy and strong  so I don’t tell her that her grain days will be coming to an end. 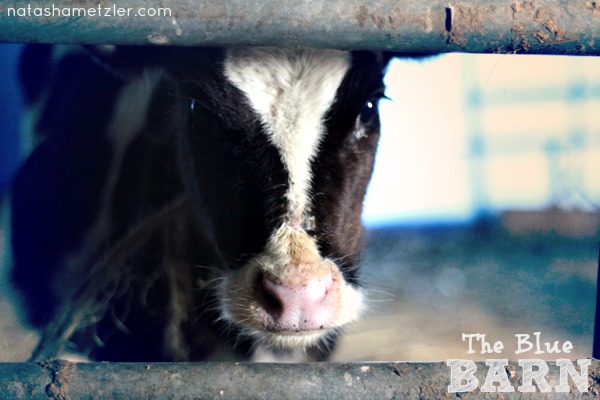 The bulls are penned together. The white-headed bull from another herd, brought in to change the blood lines a bit, and Flash, the ten-month-old, red-headed, we-should-have-sold-him-but-I-thought-he-was-so-cute bull. He is cute. And he holds his own against the big white brute.

The rest of the heifers are growing well. Getting taller and rounder on big bales of first-cutting hay.

And while the barn is quieter and bluer, I still love it.

Previous Post: « Pain Redeemed and Grace Learned
Next Post: things i love about my husband {1} the morning routine »