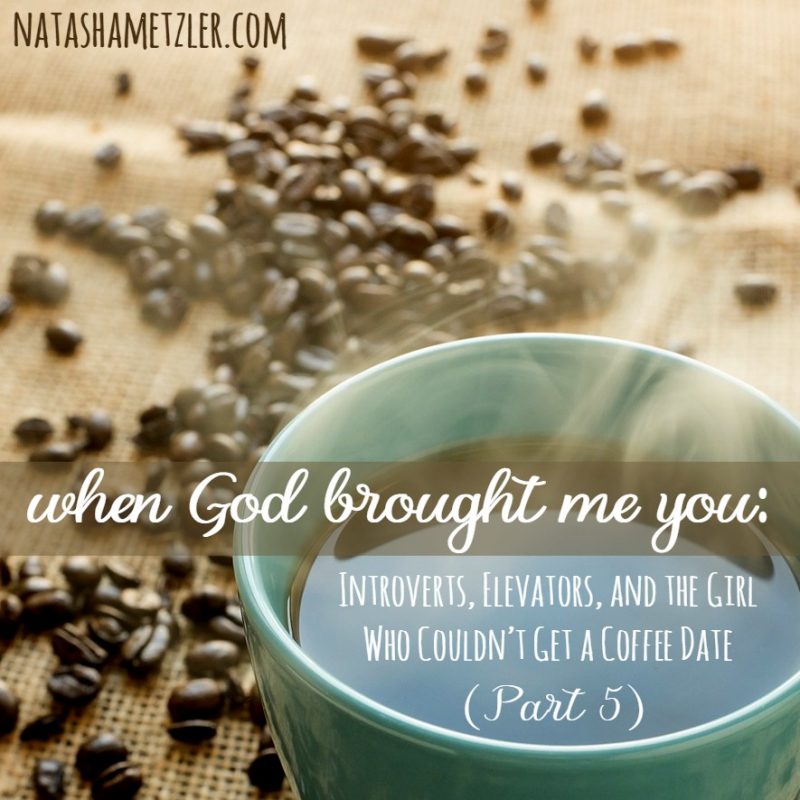 Eventually he did call for a date. It wasn’t on purpose, but I had to turn him down. I did say that I hoped it would work out the next time. Which was pretty stinking flirty of me.

The next time we saw each other was at a friend’s house, completely by accident. We talked. He really did seem to like me. I mean, every time I looked up, he was smiling at me. I still didn’t know how I felt about him, but I kept hearing my brother’s voice in my head: “This is the kind of guy you should marry. He’s a real man, Tasha, not some snot-nosed kid.”

Huh, maybe this was one reason all potential dates had stayed away—my big brother was downright condescending toward twenty year olds.

The group of us spent most of the day together. We walked through town to a little ice cream shop and he slowed down so the two of us could walk a ways behind everyone. We started talking about traveling and found that our lives had been running almost parallel for quite some time.

We’d both been in the country of Haiti in the same year, both were in Homer, Alaska (missing each other by a matter of months), and were both at the same Mennonite Relief Sale in Sarasota, Florida five years before. We’d almost crossed paths in Rosedale, Ohio and spent several years missing each other at gatherings in our home town. We laughed at how close we’d come to meeting in so many places.

He bought me a waffle cone at the Family Ice Cream place, which was exceptionally lovely of him. It wasn’t the first time a guy had bought me ice cream, but it was the first time that one had grinned at me like that when I thanked him.

As evening rolled around, it was time for another friend’s graduation party. The whole group of us decided to all ride in the same vehicle. I slid in the back seat and everyone left the seat beside me empty, their eyes laughing.

But instead of just jumping in, Mr. Potential-Husband paused at the car door. Very quietly, gently, he asked, “Natasha, is it okay if I sit beside you?”

Okay, tractor mechanics are WAY better than basketball players or guys in Brazil. Seriously. It may sound stupid, but that was the sweetest question I had ever been asked. We may have been set up a few times, but that didn’t mean he was taking anything for granted. He was stating his interest very clearly and giving me a chance to encourage him or turn our relationship toward friendship instead.

I made sure to smile as I looked up at him. “Sure.”

We sat together on the way to the party and before I went home that evening, he had asked for a date. A real, true date.

After that date, he drove me home and we sat in the driveway talking until five in the morning.

Turns out sitting in your driveway talking is about the same as getting stuck in an elevator.

He told me all the reasons why he hadn’t been able to pursue me before. He told me how much he had prayed that I would still give him a chance. He told me that he would have found the courage to ask for a date, even if my dad hadn’t talked to him—but it did help to know that I probably wouldn’t laugh in his face. He told me he couldn’t believe I wasn’t taken.

“I’m not that pretty,” I shrugged.

He looked at me with a wrinkle in his brow. “You have a really cute face,” he said.

I teased him about that on our honeymoon. A cute face? Really?

“Well, you do! And I couldn’t exactly explain all the things I found attractive about you,” he protested. “Besides, at that point, after spending an entire night sitting beside you, I was really purposing to focus on your very, very cute face.”

Our second official date took place the day after staying up until five in the morning. I went with him about three hours later (which makes for a very short night) to pick up a tractor part, eventually had dinner at a fancy little place without prices on the menus, and was so exhausted by the end that I was talking jibberish. My mom actually frowned at him when he dropped me off, wondering what he had done to her usually sane daughter. If he had asked me to marry him right then, I would have said yes—in hopes that he would then take on the responsibility of making sure I was getting enough sleep. (This is now a daily job of his.)

Okay, I’m kidding a little bit about saying yes that fast. But we were looking at our relationship pretty seriously and I knew that unless I found something about him that proved he wasn’t who he said he was, or he changed his mind about me, we’d probably end up married before too long.

And the number one thing that I learned about him with every conversation and every hour in his presence, was that he had integrity that ran so deep it astounded me. He was not anything other than what he said. He didn’t pretend. He didn’t dress up pretty to cover anything. He was who God made him to be and he made no apologizes for it. Like all of us, he had things in his past that he wasn’t proud of, but he never tried to hide any of it. Instead, he did the opposite– laying it all out clear and brutally honest. God had transformed his life and he was going to serve Him, no matter what.

My brother was so right. This was a guy I could spend my life with.

There were a few misunderstandings along the way, like the time he claimed that I kissed him when we were arguing over something on our third date. (I did NOT kiss the man, he hadn’t even held my hand yet! There is no way, on God’s green earth, that I would have kissed him. I leaned toward him to say something. If he felt anything it was hot air. And yes, we still argue about this, but since I’m the writer in the family it can go down in history that I did not kiss him that day. There aren’t even words for how mortified I was the first time I heard him tell someone he knew I really liked him because I had kissed him first. Gah! The only redeeming factor was that he did acknowledge that such an action was totally out of character for me. But again, it didn’t happen, so my character is still intact, thank you very much.) And, of course, the time he took me to meet his mother and I realized he hadn’t even told her about me or warned her we were coming (poor sweet mother-in-law-to-be).

But regardless, it wasn’t long before I was tired of having to go home each evening. I just wanted to be with him. We had talked about everything under the sun. I knew his thoughts on a thousand subjects. I knew he was a good, good man. I knew he took his faith seriously and was sensitive to the Holy Spirit’s direction in his life. I knew he would protect me with everything he had and everything he was. He worked hard, was incredibly strong, and gave to everyone around him—constantly. He was completely open with me about everything. I knew he saw me, really saw me, and wanted to be with me. That fact stunned me.

I hadn’t realized how afraid I was of showing my real self to anyone—but when the day came that I told him all the reasons why he shouldn’t want to be with me, and certainly not marry me—he just wrapped me up in his incredibly strong arms and kissed away my tears.

Finally, the wandering spirit in me had found a home—with him.

I was right, I was terrible at keeping a relationship casual. I was very, very glad that I hadn’t dated in high school or all the years since. I was so glad all the other guys had been immune to me, or blind, or scared of my brother, or whatever they were. I was glad it was only him who really knew me because he was the safest place I had ever been.

He proposed at the farm.

I didn’t say yes to get the farm, I promise, but man, I loved that place.

He didn’t have a ring right then and I didn’t care. He was trying to get running water and electricity to the house he was fixing up for us to live in and my practical side wouldn’t let him spend money on something so frivolous. He brought up the subject a couple times and I kept waving him off. “It’s fine. I’ll have a wedding band,” I told him.

One evening I fell asleep on his couch while waiting for him to finish barn chores so he could take me home. When I woke up he was kneeling beside me with a diamond ring. I started crying. “You really didn’t have to,” I told him.

He laughed. “I knew you’d be my wife with or without the ring, but I was always going to get you one, silly.”

I looked up at him through my tears and he sighed. “Aw, Tash,” he said, leaning his forehead against mine, “you don’t have any idea how amazing you are, do you?”

And, hilariously enough, a few days later he mentioned in passing how thankful he was that I didn’t wear lipstick.

But the best part of the whole story was the day we were working together in the house and I mentioned that I just loved the ceilings we were putting in. The remodel of an old pigeon barn into an amazing little bungalow was just another example of my soon-to-be husband’s good taste (I really like to talk up his good taste, for obvious reasons) and my favorite part was the wood ceilings. Reused tongue and groove that had darkened with age into rich strips of color covered the cathedral ceiling of the kitchen/living area. After I finished gushing (well, sort of. I don’t really do “gushing” as well as some people, but I gave it my best shot) he glanced up at the ceiling again and smiled. “Yeah, it’s probably my favorite thing about the house too. It adds a lot of character. You know it was an old dance floor?”

It took me awhile to explain to him why I was laughing so hard. God just cracks me up.

We danced under the dance floor that afternoon and I finally realized that my dream hadn’t just been a reminder of how God saw me, chose me, and loved me. It was also a gentle promise about the man who was on his way.