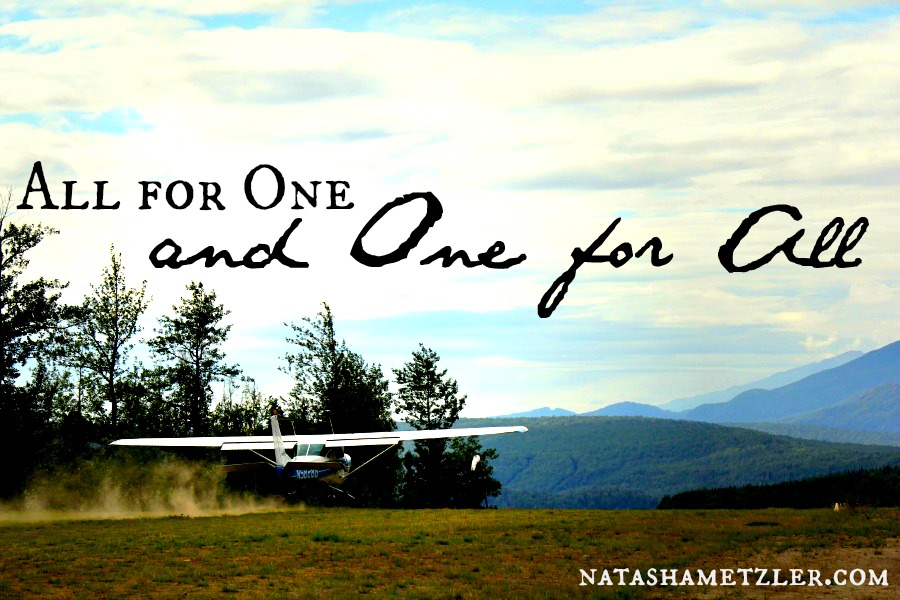 “So you train pilots to do mountain flying?” the men questioned. They had stopped by the office on a whim. Ben, a pilot who is working on his instrument rating, happened to walk through and stopped to chat with them.

We all heard about Ben’s response. How he confidently and boldly explained that they don’t just train pilots to do mountain flying, they train them to use mountain flying skills to take the gospel to the uttermost parts of the earth. To the arctic, to the jungles, to furthest corners of Africa and Siberia. Because Jesus is real and is living and is worthy of the praises of all men from all nations.

The story reached Dwayne King that evening while he was making chocolate milkshakes to celebrate a student’s first solo flight. He listened to the tale and lifted his hands in victory, “Praise God,” he said, “Oh, praise God.” As if the act of spreading the word about Jesus to another soul was something that personally affected him.

On Sunday we visited a small Russian congregation.  At the end of the service, they allowed people in the congregation to bring greetings from brothers and sisters around the world. From Michigan and Oregon, from Florida.

Vanya shared greetings and love from the church family in Russia. He was sent to Kingdom Air Corps by his home church for the sole purpose of learning to fly to help bring the gospel to villages further north in Siberia.

And the people rejoiced in hearing from brothers and sisters around the world, as if they were intricately connected.

“How is your adoption going?” a friend asked. We’d only met two times. She heard me speak once and we’d exchanged a few emails. I told her that it had fallen through and she immediately started wiping away tears.

She hugged me tight and held on as if the painful things that I endured impacted her life in a real way. “I hurt with you,” she whispered into my hair and I knew it was true.

“Where are you from?” he questioned and we answered, explaining that New York doesn’t actually mean the city. It means north and cold and windmills and farm upon farm upon farm.

The natural progression of the conversation turned to the question that always causes me to glance hurriedly at my husband. “So, do you have any children?”

“No,” my husband says after a pause, “we’d love children but we don’t have any.” I watch the tears that make his eyes shine and I know what he’s thinking about the little girl we dreamed of taking on this trip with us, to visit our people and our history and create shared memories.

And I look over at this man whom we just met. This man who is working at a mission because he believes with all of his heart that Jesus Christ is still living and moving today. This man who puts big work-worn hands on us and starts praying and it’s not short and it’s not flippant. It’s heartfelt and brutal and honest and hope-filled.

He blinks tears for the pain of a couple whom he just met, as if the things that make us mourn, cause his heart to clench as well.

We were standing in the food bank, surrounded by boxes of donations that still needed to be sorted and given away. He was talking low, in a half mumble, about the time he overheard some college students discussing the “juicy bits of gossip” about different churches they had interacted with through the years; citing their stories as “proof” that all Christians are hypocritical liars.

“I pulled a chair right up between them,” he said, “and told them that if they wanted scandal, I could tell them stories of scandal.”  With a degree in church history, he really knew his stuff. He systematically went back through time, telling the stories of failure and loss that have dotted the churches history from the moment it was conceived.

“I was raised by Athiests, you know,” he explained, “and disappointed everyone I loved in my pursuit of Christ. I know, full well, the reasons to reject Christianity. I also know that they are not enough, not nearly enough. But if scandal was what these kids wanted, I was going to give it to them.” He paused and looked at the ceiling, “I told them stories that made their eyebrows raise, and when I got to the year AD1100, my tears started. I broke down and cried,” he sighed, “I cried for all those who have gone before us who failed as we fail. For all those who claimed the name of Jesus but never knew Him. For all those who marked the Bride of Christ with the blackness of unrepentant hearts. Then I just looked at these young college kids. Perhaps they thought I was crazy but I hope they understood that my faith is more than just knowledge, it’s real and it’s personal.”

So personal that the failings of 2,000 years worth of Christians caused him, a man who rarely shed a tear, to cry at the brokenness of it all.

“I’ve talked to many people of other faiths and it sorrows me so deeply that the reasons they have not turned to Christ has very little to do with real arguments,” he sat back in his chair and looked around the small coffee shop, “it has less to do with a belief in God and more to do with the need for true community. I took some Turkish friends to visit a few churches and they just shook their heads, ‘these people don’t even know each other’ they told me. And to that, I had no answer, because he was right.”

I glanced quick at my husband, my mouth open to answer, but he was already speaking, “We have some people you need to meet,” Amos says, “Some people who are living true community. We know them. And we’re learning from them. Learning to share joys and sorrows and truth and brokenness and hope. I know the American church has lost something valuable, but I know some who are finding it again.”

It’s true. I look at men like Dwayne and Randy and Jim and Ben. I look at women like Cindy and Carolyn and Kathy. I look at all of them and the way they interact and move and look around with grace and feel the joys and sorrows with true depth and I think, Oh, God, make me this kind of Christian. Make me truly see the Believers around me as an extension of myself. Help me look so far beyond denominations, so far beyond personal preferences and ideals. Help me see them as you do, as one true body.

Help me view your church as one. From the east to the west. From the north to the south. One body. One Lord. One Savior of all. 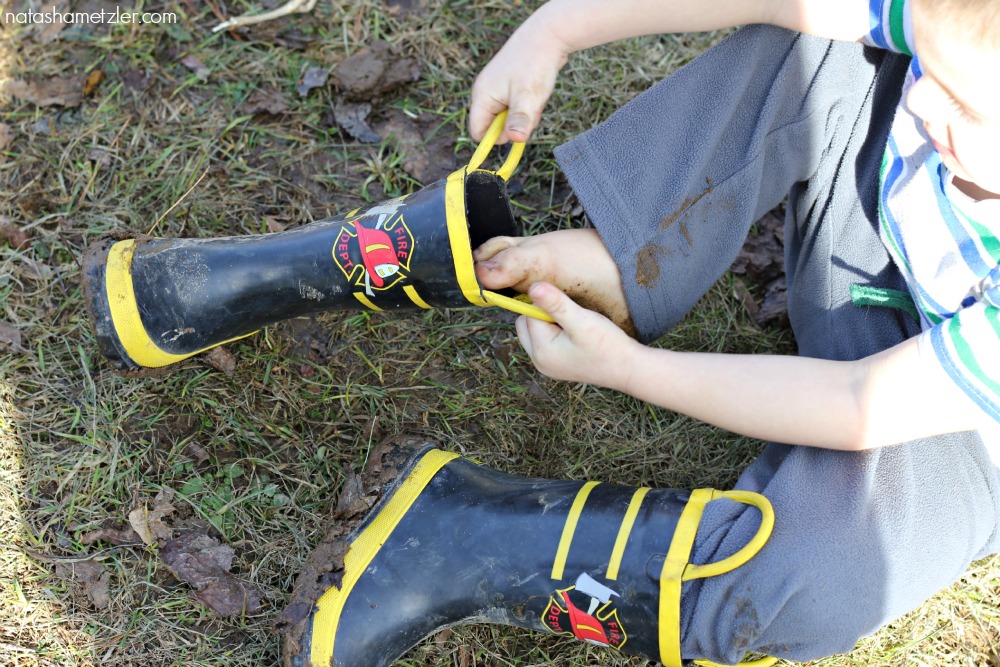 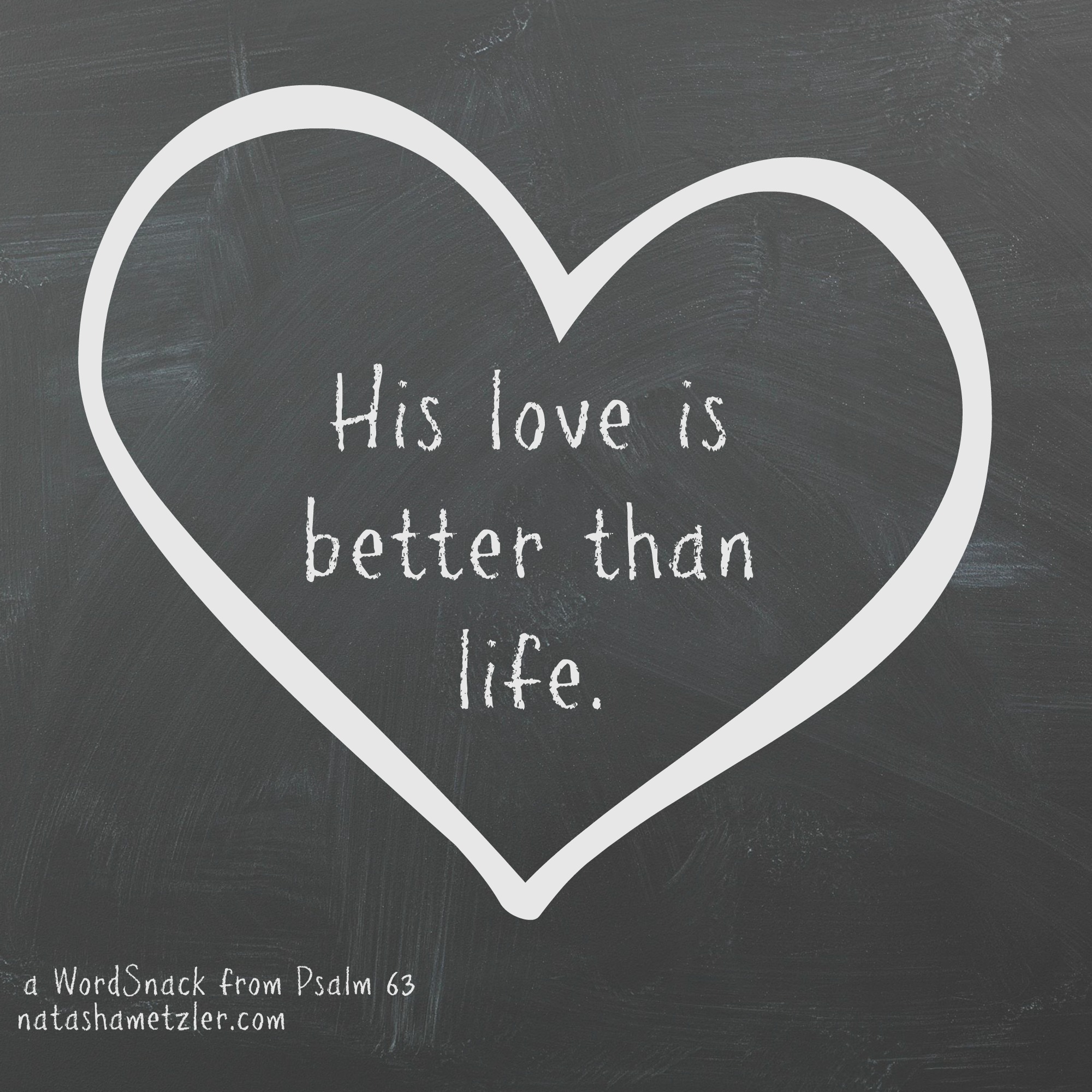 I was at Bible college, surrounded by people and conversation and community, but I had never felt so alone. What was wrong with me? After growing up on a Bible school campus, I had always dreamed of the day when I would be one of the students and here I was! But something was missing…. 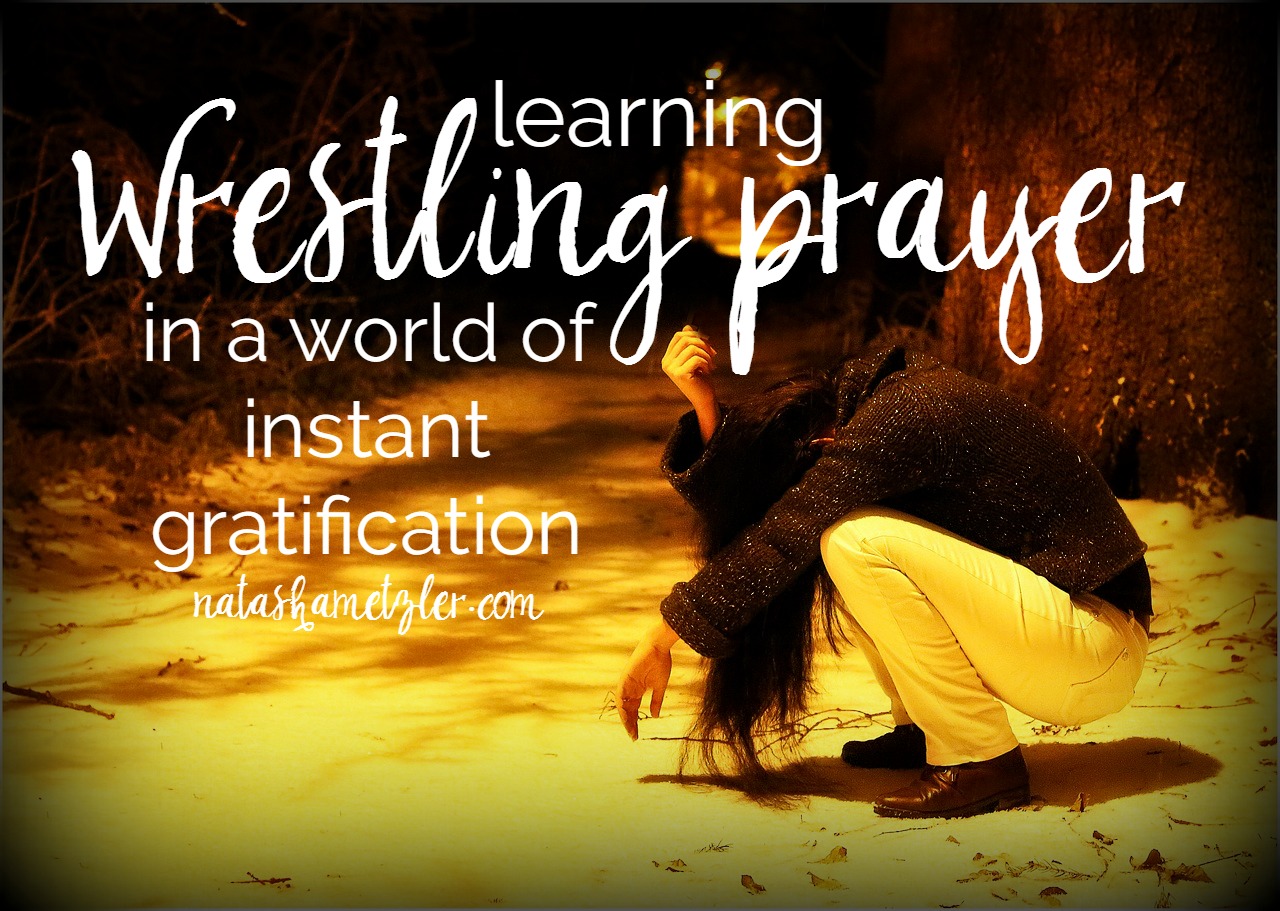 I like things to be instant. Well, everything except pudding. Nothing beats a slow cooked custard pudding. But for the most part if I decide something, I want to go right then and get it done. I’m just like that. Yet, I’m learning that things don’t happen this way in the Kingdom of God. For some reason… 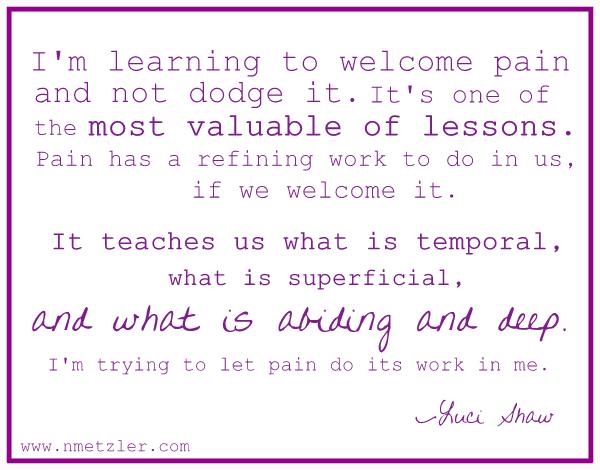 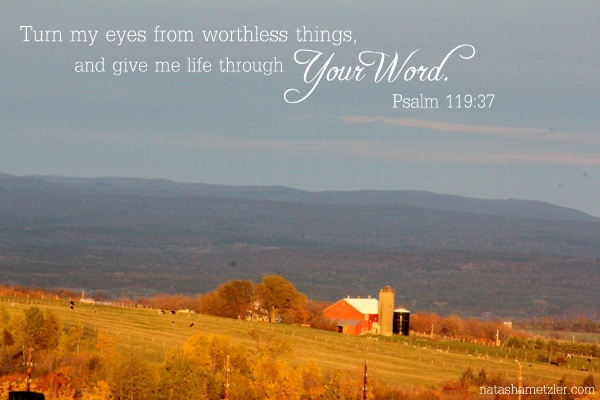 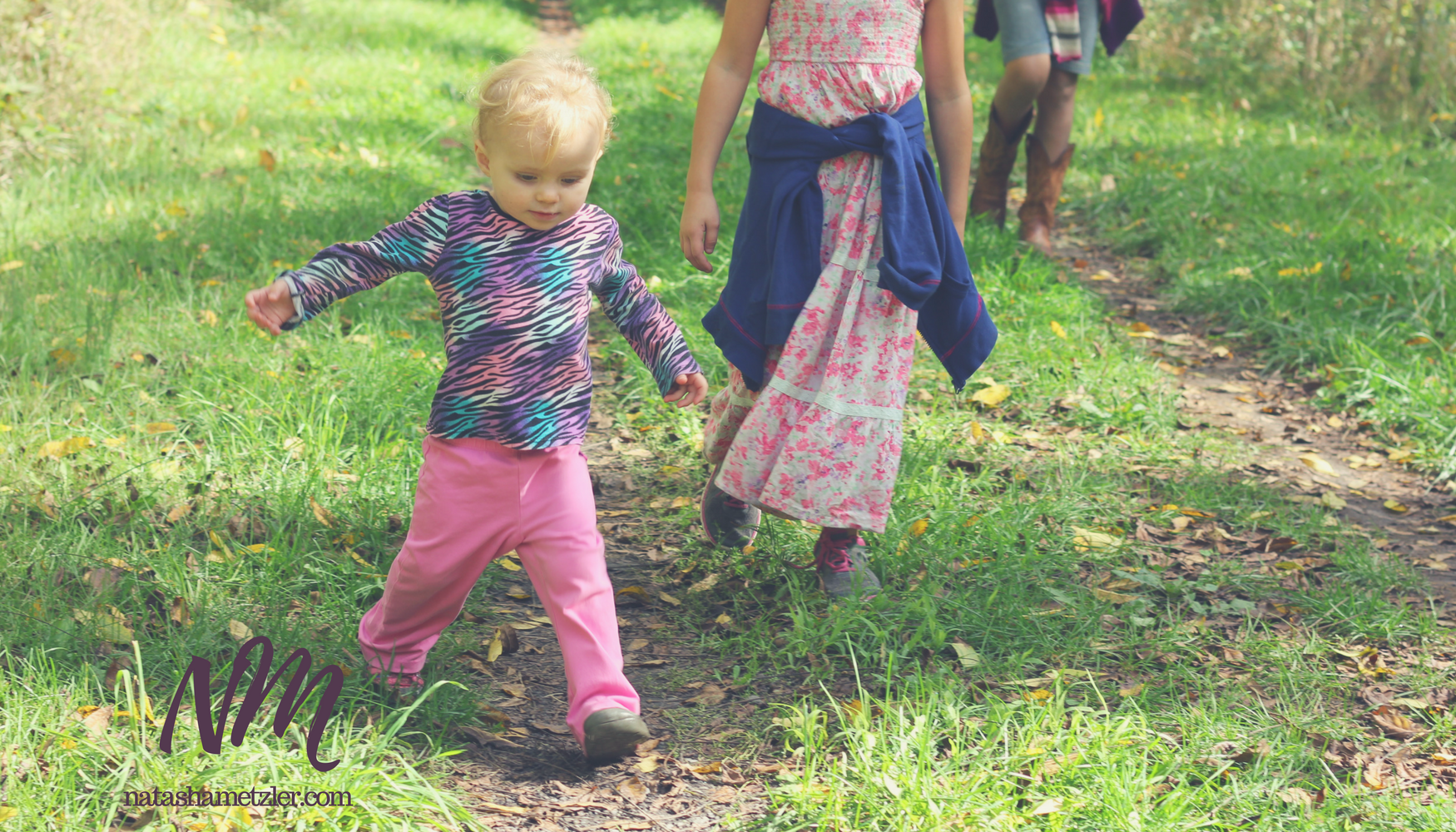